Microbes were the first astronauts

MIT Researcher Chris Carr, responsible for the life detecting device, SETG (Search for Extra-Terrestrial Genomes), says that if we do find life on Mars that we are related to, it’s possible that we have our roots on Mars. Though not entirely impossible, it could also be the other way around, but orbital dynamics shows that it’s about 100 times harder for a rock to travel from Earth to Mars than from Mars to Earth. Microbes are incredibly hardy and could very well survive the journey, even if the rock was launched as a result from an asteroid impact.

Mars in many ways appears to be a dead, dry and cold planet, but there’s evidence that the climate of Mars once was warmer and that water flowed on the surface. It’s not just to learn more about our origin these experiments are valuable, if we are to send astronauts to the Martian surface in the future we need to know if life exists and if it is related to us, and if in fact we are related we probably need to take precautions as closely related organisms are much more likely to be infectious. 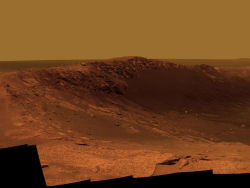 Is life lurking beneath the surface?
Picture: Credit, Nasa

The SETG will analyze samples of Martian dirt collected by a rover equipped with a deep drill, and after the RNA or DNA is amplified the search for genetic sequences that are common on Earth would commence. If we do find life on Mars, it will probably be under ground and not on the surface.

With the Curisoty rover and now this new device it's obvious that mainstream scientists are beginning to take life in space a bit more serious as compared to what we are used to. It's incredibly satisfying to see real effort and progress being made.

The device could, if all goes well, be sent to Mars sometime in 2018. Let us just hope for the best.

There'e plenty of more information about this device at Space.com

The two shuttles Discovery and Endeavour are being retired, does that mean that space exploration will stagnate?
- Nope. Nasa is performing some rigorous testing of the new Mars rover Curiosity, or MSL as it is called. The new rover, as the name suggests, will be able to gather and analyze more information as it weighs four times more and is about twice as big as the previous two rovers Spirit and Opportunity which landed on the surface of Mars back in 2004.

It’s easy being a bit torn as what to make of this robot, is it really useful and what is its true purpose? Robonaut was boxed and launched together with the last mission for the Discovery space shuttle, once at place it had quite a wait in its little box.

Few things are as fascinating as black holes, and there are probably an equal amount of facts as there are myths and speculations. This list contains some of the things you should know.

The space shuttle Endeavour is scheduled for its last mission, and it’s cargo will hold an entirely new piece of measuring instrument called Alpha Magnetic Spectrometer (AMS). One of the more exciting aspects of the AMS is that its purpose is not to search for things we already know about, but to locate and analyze phenomena which we have not yet imagined or discovered.